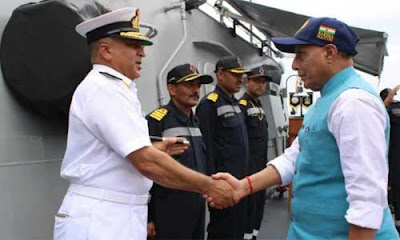 The Ministry of Defence has sought proposals for procurement worth Rs 15,000 crore that will give a push to indigenous shipbuilding to bolster Indian Navy's warfare capabilities.

A request for proposal (RFP) has been issued for four shipbuilding projects.

The Ministry of Defence in a statement said that while the RFP for six Next Generation Missile Vessels (NGMVs) has been issued to seven shipyards, RFPs for eight Fast Patrol Vessels (FPVs) and 12 Air Cushion Vehicles (ACVs) also known as Hovercraft as it can travel over land, water, mud or ice and eight Missile-cum-Ammunition Barges have been issued to shortlisted Indian shipyards.

The Next Generation Missile Vessels will be ships armed with anti-ship and surface-to-air missiles.

"In addition to the above, a few more RFPs for more shipbuilding projects are likely to be issued in the next few months," the MoD statement said.

In order to make the process of qualifying the shipyards for the issue of RFPs for shipbuilding projects of various ships and craft of the Navy and the Coast Guard more objective and to encourage participation by a larger number of Indian shipyards, an exercise was undertaken by the ministry along with Indian Navy and Coast Guard.

This led to rationalisation of guidelines for capacity assessment of shipyards that have been promulgated recently.

"Rationalisation and promulgation of financial selection criteria have paved the way for issue of RFPs for a large number of shipbuilding projects that have been pending. Further, in a significant move to encourage smaller shipyards, participation in the projects with the anticipated annual outflow of less than Rs 75 crore has been restricted to smaller shipyards having an average annual turnover less than Rs 500 crore," the MoD statement said.