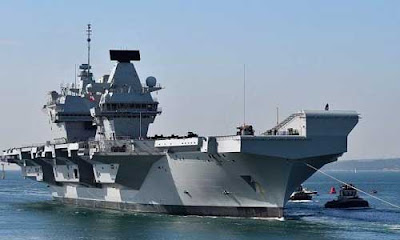 The United Kingdom is in talks with India for building a new state-of-the-art aircraft carrier along the lines of Britain's HMS Queen Elizabeth as part of the ongoing 'Make in India' negotiations.

The Indian Navy is in talks with the British government to buy detailed plans for the 65,000-ton British warship to build a so-called "copycat supercarrier" named INS Vishal in 2022.

"An Indian delegation has already visited Rosyth dockyard in Scotland where HMS Queen Elizabeth was assembled and where a second supercarrier, HMS Prince of Wales, is now being built," the 'Sunday Mirror' reported.

As per the media inputs, if both the countries finalize the deal, the new warship would be built in India and UK companies could supply many of the parts.

The report further states that this new Naval carrier would serve alongside India's 45,000-ton carrier INS Vikramaditya bought from Russia in 2004 and the future 40,000-ton INS Vikrant giving India a larger carrier fleet than Britain.

"We have regular discussions with India on a range of equipment and capability issues. It would be inappropriate to comment further," PTI quoted UK Defence Minister Stuart Andrew as saying.

The British and French aerospace giants BAE and Thales owe the design for UK aircraft carriers.

A BAE spokesperson said that discussion has begun with India and added that design can be modified to meet the Indian Navy and local industry requirements.

In 1987, India had bought Britain's Falklands War carrier HMS Hermes which later was re-christened as INS Viraat and decommissioned two years ago.

HMS Queen Elizabeth is the largest warships ever built for the Royal Navy and is capable of carrying up to 60 aircraft. It has been named in honor of the first Queen Elizabeth.