Home » IMD » India » skymet » weather » Here is why there was so much chaos around dust storm, thunderstorm in India

Here is why there was so much chaos around dust storm, thunderstorm in India 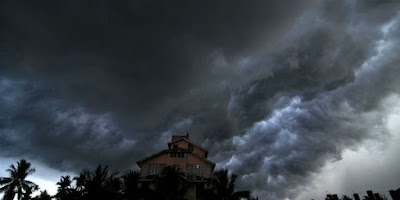 This alert had come in wake of the deadly dust and thunderstorm that had swept several parts of the northern plains last week. These severe pre-Monsoon activities had claimed around 124 lives and left over 300 others injured in five states around May 2-3.

Alwar, Dhaulpur, Bharatpur, and Agra were some of the worst affected regions. Heavy rains were accompanied with squally winds that had even gone up to 132 kmph during that time.

However, severe weather alerts followed to this, were just given on precautionary note, feel meteorologists at Skymet Weather.

As per weathermen, May is the peak month for pre-Monsoon weather activities and most parts of the country remain vulnerable to dust storm, thunderstorm, lightning strikes, rain and thundershowers of varying intensity. These activities can be categorized into three categories – mild, moderate and severe.

Country usually records 4-5 spells of intense thunderstorm and dust storm. To be precise, the country witnesses only two spells of extremely severe pre-Monsoon activities. So, out of these, one has already been witnessed last week.

It is very rare when the dust storm of such intensity strikes again in the span of a week. In fact, it is an inbuilt character of the storm that they do not visit same place with the same intensity again and again and with the same speed.

“Dust storm basically is a result of wind instability, which once released does not occur again soon. Thus, expecting second round of these severe weather events on the weekend gone by was not expected,” said AVM G P Sharma, President- Meteorology and Climate Change, Skymet Weather.

He further added, “Rain and thundershowers last week had reduced the maximum temperatures and we know that heat is the main triggering factor for pre-Monsoon activities. Hence, that made it further clear that we were not expecting any severe dust storm this weekend. Although isolated activities were predicted at a few places.”

Moving ahead, weather conditions are now favourable for another round of rain, thundershowers along with dust storm and thunderstorm across North India. According to Skymet Weather, we can expect mild to moderate intensity of dust storm, thunderstorm, lightning strikes, rain and thundershowers across Jammu and Kashmir, Himachal Pradesh, Uttarakhand, Punjab, Haryana, Rajasthan, Delhi, Uttar Pradesh, North Madhya Pradesh. Parts of East and Northeast India will also witness these activities.

We would once again reiterate that residents only need to exercise some caution and a sense of panic does not need to be created.