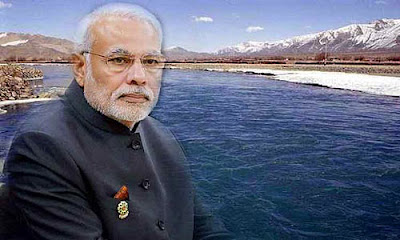 In election-bound Punjab, Prime Minister Narendra Modi said today that Indus river waters "belong to our farmers" and India has the right to the waters flowing into Pakistan."The Indus waters, India has the right to those waters...it flows into Pakistan. Flowing through Pakistan, the water goes into the sea. That water belongs to the Indian farmers. We will do whatever we can to give enough water to our farmers," PM Modi said at a rally in Bathinda.Taking a swipe at the Congress, he said: "Governments came and went in Delhi... no one paid attention to the problems of the farmer. Pakistan took full advantage of this, but not anymore. I will ensure that my farmers get what is rightfully theirs."He also commented that after India's surgical strikes, "Pakistan didn't know what hit it'. The country is yet to recover from the strike, he said of the operation carried out by the army in September targeting terrorist staging areas in Pakistan Occupied Kashmir.The 1960 Indus Waters treaty brokered by the World Bank, on the sharing of the waters of six rivers between the two countries, became a flashpoint after the Uri attack in which 19 Indian soldiers were killed by terrorists from Pakistan. PM Modi then signaled a review of the pact, saying "blood and water cannot flow together."The Indus Waters Treaty gives India rights to use the eastern rivers - Ravi, Sutlej and Beas - and Pakistan has control over the three western rivers, Chenab, Jhelum and Indus.India has asked for a neutral expert to examine Islamabad's complaint against hydroelectric power projects on the rivers that flow into Pakistan. Pakistan has, at the same time, asked for an international court of arbitration.Pakistan warned India at the UN Security Council against using water as 'an instrument of coercion or war".
source:-NDTV