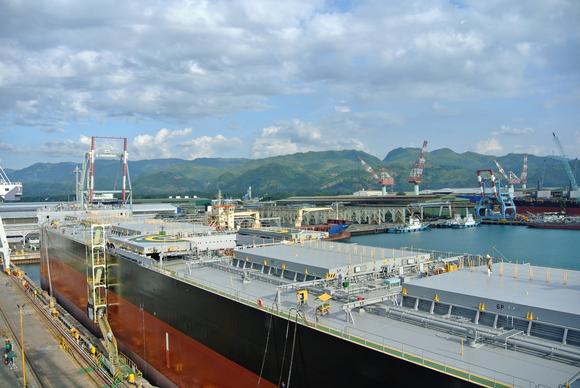 VISAKHAPATNAM: The United Shipbuilding Corporation of Russia, the fifth biggest shipbuilders in the world with a turnover of 5 billion US dollars, is considering Visakhapatnam for making its manufacturing hub.

Alexey L Rakhmanov, president of the United Shipbuilding Corporation, during a brief interaction with the media after the inaugural of the two-day dialogue between India and Russian defence industries here on Wednesday said that the company had found Andhra Pradesh in tune with its needs. “However, there is a long way to go before the final decision is taken,” he said.

Earlier during his presentation at the inaugural, he said that the proposed manufacturing hub in India could become their global production unit.
“Russian shipbuilding firms are inclined for setting up joint ventures with Indian firms as part of the Indigenization of defence manufacturing equipment,” he said while underlining the vast scope for production of commercial vessels and lauded the emphasis being given by the AP government on port-based development and inland waterways.

Speaking on the occasion, Krishna Kishore, CEO of Andhra Pradesh Economic Development Board said Andhra Pradesh offers a perfect eco-system for defence manufacturing equipment, as it is not only stands second in the ease of doing business in India, but has the second largest sea coast, six ports and eight more in the offing, six airports with another six under proposal.

Kartikeya Misra, director of the state industries and commerce department said Indian defence needs are met by imports up to 60 per cent. “It gives a good opportunity for OEM (Original Equipment Manufacturers) to invest in India, particularly Andhra Pradesh.”

According to him, Indian Navy would need 13-15 sea vessels, but existing shipyards in the country can build five vessels at the most, which in turn gives an opportunity for the ship builders of Russia to invest in the country. “It’s a win-win situation for all,” he said.Rear Admiral LV Sarat Babu, chairman of Hindustan Shipyard Limited said shipbuilding is critical to maritime nation like India for both its defence capabilities and for its economic prosperity.

“Investment in shipbuilding will trigger investment in other allied sectors that will be nearly 10 times more. Low labour cost is one of the advantages of India,” he pointed out.

Vice-Admiral HCS Bisht, flag officer commanding-in-chief, Eastern Naval Command (ENC) recalled the strong ties between India and Russia not only in defence but also in other sectors.
“In fact, role of Russia is very much there in the growth story of Vizag,” he said.