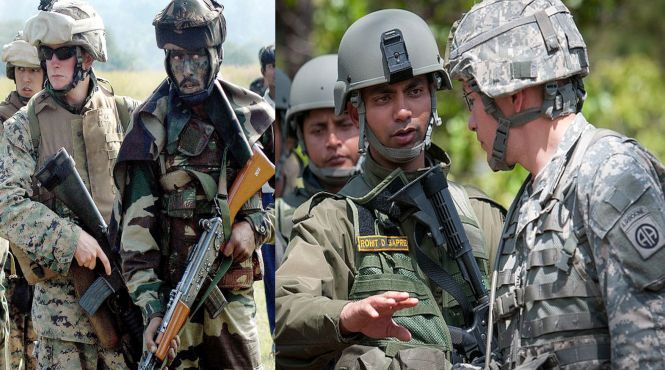 NEW DELHI: The Yudh Abhyas 2016 joint military drill between India and the US, focused on anti-insurgency and anti-terrorist operations, got underway at Chaubattia in Uttarakhand on Thursday.
Indian and US soldiers stood side by side in an impressive military parade that saw the unfurling of the national flags of both countries while their national anthems "Jana Gana Mana" and "The Star Spangled Banner" played, an official statement said.

The joint contingent gave a ceremonial salute to the two senior most officers of the US and Indian side reviewing the ceremony. The exercise will conclude on September 27.

The Indian Brigade Commander welcomed the US soldiers and in his inaugural remarks highlighted the shared beliefs in democracy, freedom, equality and justice that both countries cherish.

Company strength army personnel from USA and an equal number of Indian soldiers are taking part in the nearly two-week long joint training exercise that will see them hone their tactical and technical skills in countering insurgency and terrorism in a UN Peacekeeping scenario involving a combined deployment at a brigade level, the statement said.

State of the art equipment for surveillance and tracking, specialist weapons for Close Quarter Battle with terrorists, explosive and lED detectors, as well as the latest communication equipment are being fielded by both sides.

Both sides will jointly train, plan and execute a series of well developed tactical drills for neutralisation of likely threats that may be encountered in UN peacekeeping operations. The experts from both sides will also hold discussions to share each others' experiences in varied topics ofr mutual interest.