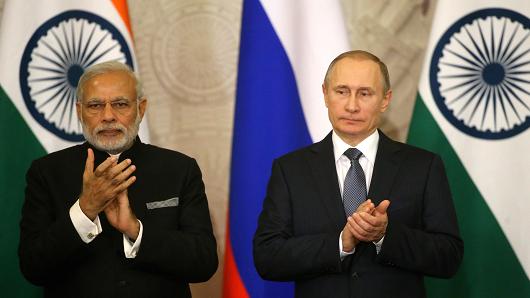 Even as geo-politics is evolving fast with Moscow making certain military overtures to Islamabad, Delhi is expanding its strategic partnership with Russia that will be showcased during President Vladimir Putin's visit for the Brics annual summit in Goa next month.

India has sensitised Russia about its concerns over its proposed military (four helicopters) sales as well as joint drills with Pakistan Army. Sources remained hopeful that Moscow will not take any step that is detrimental to Indian security interests.

While India has expanded its strategic-military partnership with the US, it is aware of the fact that Russia is a major player in West and Central Asia and has significant presence in Asia-Pacific region. Russia is crucial for India in balancing power equations in Asia, noted a source.

India is acting in tandem with Russia in Gulf, Iran and Afghanistan and on Friday the two sides will hold consultations in Delhi on Asia-Pacific. "India is vital for Russia's Asia-Pacific Policy. After all, Moscow does not want to box itself by expanding ties only with China.