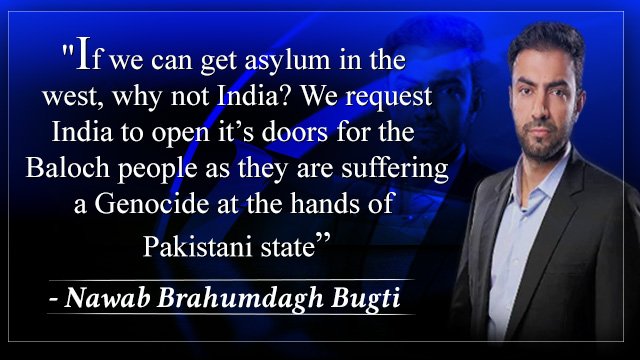 NEW DELHI: In a move that will no doubt annoy Pakistan, Geo News reported late yesterday that Baloch leader Brahumdagh Bugti, currently in exile in Switzerland, is set to get Indian citizenship after long negotiations with Indian authorities.

India will also give citizenship to Brahumdagh's key lieutenants in Switzerland, including his trusted aides, Sher Muhammad Bugti and Azizullah Bugti, sources told Geo News, a Pakistani media outlet. Brahumdagh is founder of the Baloch Republican Party (BRP), that Pakistan has outlawed.

"We will use Indian papers to travel around the world to campaign against Pakistan and to highlight our case. We have openly thanked Narendra Modi for his support and we are no more hiding anything. We have no other option. We do not care what our opponents think of our support for Modi and his support for us," the BRP source is quoted as saying.

Brahumdagh has alleged in the past that the Swiss government is under pressure from Pakistan to not grant him citizenship. He realized earlier this year, the report says, that he may not get a Swiss passport any time soon and could be confined in Switzerland for an indefinite period of time.

The Baloch leader fled his hometown Dera Bugti in Baluchistan in 2006 following the assassination of his grandfather Akbar Bugti. He lived in Afghanistan as a state guest, first, and was then flown from there to Switzerland in October 2010. He has been living there ever since, in political asylum, with his family.

Brahumdagh will formally apply for Indian citizenship in Geneva, Switzerland, after a meeting of his party's officials there on September 18-19. In the meeting, seven members of the 16-member BRP - from Germany, London, Norway, Sweden and Switzerland - are expected to be present and endorse Brahumdagh's decision to get India's help.

"India has facilitated Dalai Lama against the pressure from a powerful country like China. It helped Sheikh Mujeeb-ur-Rehman as well. It will help Brahumdagh and his colleagues as well. Brahumdagh has asked for Indian citizenship for himself and all his colleagues. There are 15,000 Bugtis stuck in Afghanistan. Around 2,000 are in various countries including European countries. Their asylum applications have been either approved or are in process. Brahumdagh would like all these people accommodated along with his own case," the BNP source told Geo News.