The deal for M-777 howitzers — being processed as a direct government to government purchase from the US — was negotiated and finalized before April.

NEW DELHI: A $700-million deal to procure light artillery guns for deployment on the China border has hit a bureaucratic hurdle at the last mile. The price has gone up by over 10% after the government withdrew customs duty exemption for military imports.
The deal for M-777 howitzers — being processed as a direct government to government purchase from the US — was negotiated and finalized before April, when import of arms and ammunition for use by the defense forces were eligible for customs duty exemption.
Accordingly, the defense ministry budgeted over $700 million to purchase 145 of the howitzers, with a clause that they would be integrated, assembled and tested domestically as part of the 'Make in India' initiative. 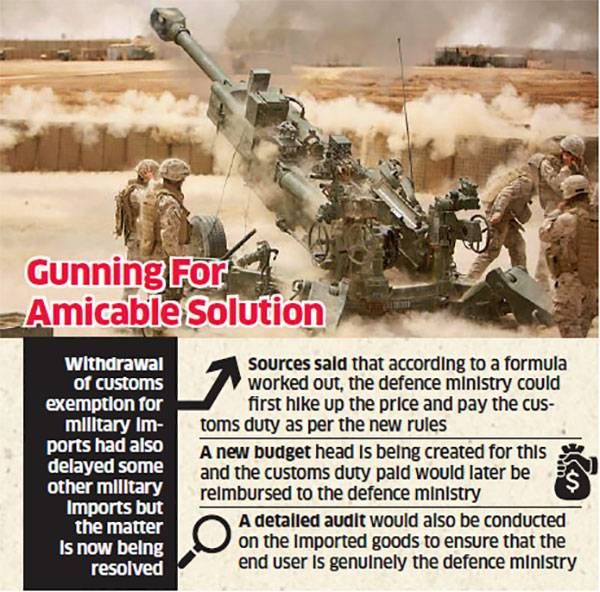 Change in customs rules raises price of M-777 howitzers guns meant for China border by over 10%
Now, with the cost gone up by over 10% due to the change in rules, the defense ministry has to clear paperwork for an amended amount. Officials that ET spoke with said that it was just a matter of accounting — the extra money would stay within government coffers, either as tax or as duty waived off.
BAE Systems, which manufactures the gun and has a partnership with Mahindra Defence to assemble it in India, said in a statement to ET: "This is a matter between the Governments of India and the United States to deliberate and comment.
BAE Systems stands by ready to support discussions to progress the Foreign Military Sale of M-777 Lightweight Howitzers to contract agreement and deliver the combat-proven 'Make in India' M-777 to the Indian Army at an advantageous price with early deliveries."
Mahindra Defence, that plans to set up a plant for the M-777, said that the issue would be resolved by BAE. "We do not see it as a problem. It is an issue for BAE to resolve," SP Shukla, who heads the Defence Business at Mahindra, told ET. The withdrawal of customs exemption for military imports had also delayed some other military imports but the matter is now being resolved.
Sources said that according to a formula worked out, the defense ministry could first hike up the price and pay the customs duty as per the new rules. A new budget head is being created for this and the customs duty paid would later be reimbursed to the defense ministry. A detailed audit would also be conducted on the imported goods to ensure that the end user is genuinely the defense ministry.
Source>>indiandefencenews.in