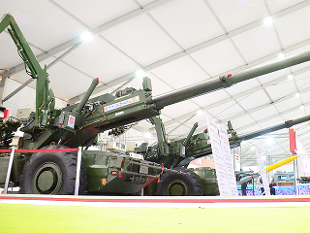 BHOPAL: Three indigenously-developed 155 mm 'Dhanush' artillery guns have been handed over to the Indian Army by the Jabalpur-based Gun Carriage Factory (GCF).


"Three 155 mm howitzers (Dhanush) have been handed over to the army recently for user's trial," GCF's Joint General Manager and PRO Sanjay Shrivastava said. GCF is an ordnance factory, which received its first order of 500 transport carts in 1905.

"Another consignment of three guns is being readied and  these howitzers too will be delivered to the army shortly," Shrivastava said.

The gun, a towed howitzer with a strike range of 38 km, has been developed by Ordnance Factory Board (OFB), Kolkata, after going through the design and voluminous documents running into over 12,000 pages which were delivered to India under the first phase of Transfer of Technology (ToT) as part of the Bofors gun deal in the late 80s, another official said.

The army had demanded the six howitzers following successful summer and winter trials of the artillery gun.

The trials saw some 2,000 rounds being successfully fired from the gun in different climatic conditions like in snowy, desert and hostile areas in the country, he said.

The army had been looking for a total of 114 Dhanush guns from GCF to augment its firepower, he further said.

According to the official, the army needs a huge number of howitzers of different types, and Indian firms, some with the help of foreign manufacturers, are in the race to fulfil the demand with the gun's variants.

Costing around Rs 14 crore a piece, Dhanush, (aka 'Desi Bofors') is comparable to most current generation weapon systems which are in use by different countries, he said.

Along with electronic gun-laying and sighting systems and other features, the indigenous gun has an enhanced 11-km range as against the 27-km range of the imported Bofors.

The Indian Army had stationed a special team of officers at the GCF to help monitor the progress, coordinate proof resources and provide guidance regarding the qualitative requirements vis-a-vis the gun system from the user's perspective, the official said.

"A team from the 506 Army Base Workshop, close to GCF, had constantly provided technical inputs which it acquired by repairing Bofors gun for over two decades," he said.

The Swedish Bofors company (now owned by Britain's BAE System) could not complete the ToT for the 155 mm howitzer with 39 calibre to India, as the deal got embroiled in a major political row over alleged kickbacks in 80s.

Subsequently, the OFB struggled for a long time to produce the howitzer indigenously despite the fact that it has manufactured and supplied several components or spare parts to keep the Bofors howitzers operational in India, especially during Kargil war.

The army had been desperately looking for 155 mm howitzers for more than a decade now. It had roped in an Israeli company Soltam to upgrade the imported, Russian-made 130 mm gun to 155 mm at GCF. But the project, after the upgraded gun's trial, ran into hot water, the official claimed.