Air Chief Marshal Arup Raha on Saturday said India has no territorial ambitions, except for recovering the territories that the country had lost to its neighbours. 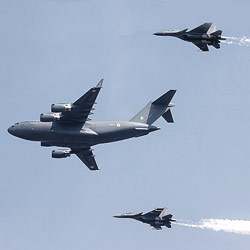 Air Chief Marshal Arup Raha on Saturday said India has no territorial ambitions, except for recovering the territories that the country had lost to its neighbours.

The Chief of Air Staff, who is also Chairman of the Chief of Staff Committee, said, "There are doubts whether the rise of China is going to be peaceful or not" and "we have no option but to be prepared to meet such a challenge in the near future".

"....India has no territorial ambition, except for recovering the territories that we lost because of the history that we had to our neighbours. So we might like to recover those. But otherwise we have no intention of any territory being occupied by us from our neighbours or otherwise," Raha said here.

Delivering Air Chief Marshal LM Katre memorial lecture, he said, "But we have a hostile border, with the legacy of the British rule and the conflicts we have had in the past. So we are vulnerable in terms of our security."

India had to have the capability to not to wage war because its aim is to avoid conflict, but to deter an adversary from launching operations against us or waging a war against us, he said adding that sir force can play a key tole in it.

"So who is going to deter? What sort of capability do we require which will give us this deterrence against our adversaries?"

Stating that there should be striking capability deep into the enemy's heartland, Raha added it can be provided "through aerospace power, air forces of the country. That is how we can explore the vulnerabilities and criticality of any adversary."

"That means we have to build up our striking power which would deter an adversary from launching any offensive against the country," he said. "To my mind that national instrument which will provide the best defence and deterrence would be in the shape of aerospace power of the nation."

Speaking about the geopolitical environment which determines the role Indian Air Force should play in mitigating threats, Raha said, "If we take a broad scan we will realise that the strategic gravity has shifted in the recent times from the West to the East."

He said, "The strategic gravity has shifted to Asia and Asia-Pacific, but there are huge challenges in terms security in the region. First of all the assertive China..., China is growing economically, it is able to spend huge sum, huge funding it can provide for developing its military power, especially Aerospace power."

Raha said China was now asserting itself in making claims on international waters and island territories and the international airspace in South China Sea and East China Sea. They are claiming new air defence identification zones, new areas of influence in the open ocean.

"It has got into conflicts with all its littoral neighbours. We are also having problems in terms of intrusion along the LAC (Line of Actual Control) in Leh-Ladakh sector as well as in Arunachal Pradesh. So the situation is not very good for the environment that is there, and peaceful rise of China may remain a distant dream if the things go the way it is happening now," he added.

Quoting from the article written by a prominent Security Analyst from Hong Kong, who mentions China is developing its capability to fight five important conflicts in the next 30-35 years that includes annexation of Taiwan, occupying Spratly Islands, annex south Tibet that is Arunachal Pradesh from India, get hold of Senkaku Islands from Japan and recover large territories in Russia and Mongolia, Raha said, "I hope it is not true, but there are doubts whether the rise of China is going to be peaceful or not."

"But we have no option but be prepared to meet such a challenge in the near future," he added.
Raha said Afghanistan and Pakistan region is also an issue. "We all know that Pakistan has been a fountainhead of terror though it is part of global war on terrorism, but it is also encouraging terrorist activities and today with the withdrawal of American and western forces from Afghanistan, I think the situation is going to be very very delicate in terms of sub conventional threats to India."

He said, "The ISIS (Islamic State of Iraq and Syria) which has grown with strength in Iraq and Syria and in the Middle East is going to be another challenge to the world."

"So the situation in our neighbourhood, specially Middle East and along the western borders, is very delicate and this challenge has to be dealt with proper planning and induction of our forces, specially Aerospace power," he added.
(By: Zee News)