Prime Minister Narendra Modi is likely to induct country's largest indigenously-built warship INS Kolkata in Mumbai in the the third week of August. 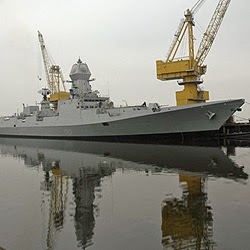 Prime Minister Narendra Modi is likely to induct country's largest indigenously-built warship INS Kolkata in Mumbai in the the third week of August.
The Prime Minister has been invited in the third week of August to induct the largest indigenously-built warship, which is constructed by the Mazagon Dockyards Limited and has been designed by Navy's design bureau, defence officials said.
The 6,800 tonne warship, which is over three years behind schedule, is a technology demonstrator and will showcase a giant leap in shipbuilding technology in the country, they said.
INS Kolkata will be a part of the Kolkata Class destroyers of the Indian Navy which will include follow-on ships by the name of INS Kochi and INS Chennai respectively.
The keel of the warship was laid down in September 2003 and the ship was launched in 2006.
Its original commissioning was planned in 2010 but due to several project delays, it will now happen in 2014. The ship had also suffered a mishap during the trial phase when a Navy officer lost his life during an incident in the fire-fighting equipment of the vessel.
As part of her pre-commissioning weapon trials at sea, INS Kolkata test-fired a BrahMos missile off Karwar's coast earlier this month.
India is also building an over 40,000 tonne Indigenous Aircraft Carrier christened INS Vikrant but it will take another three-four years before it gets inducted into the Navy.
The INS Vikramaditya procured from Russia at the cost of over Rs 15,000 crore is so far the biggest vessel in the maritime force and is expected to hold this position for at least another decade.
(By: Business Standard)