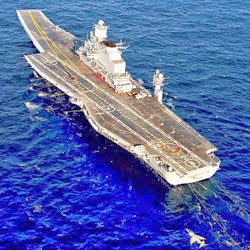 India's biggest warships, including the aircraft carrier INS Vikramaditya, have been left with nearly no protection against enemy submarines.
As if not having a new Chief of Naval Staff (CNS) for more than a month was not embarrassing enough, the Indian Navy is facing a situation in which its biggest warships, including a bunch of top destroyers, have become virtually defenceless against the ever-growing submarine fleets of the Pakistani and Chinese navies.
The reason behind this is the dithering of the Ministry of Defence (MoD) over the Navy's plea seeking an urgent go-ahead for an upgrade of Kamov 28 anti-submarine warfare (ASW) helicopters.
Of the 10 Kamov28 helicopters that were procured from the USSR in the mid-80s, only four are in flying condition today; the remaining have been mothballed for spares, it has been learned.
"The Navy is today being asked to make do with four Ka28 helicopters that have the technology of mid-80s for training pilots, doing ASW roles against modern submarines for the five Rajput Class destroyers as well as the aircraft carrier Vikramaditya," said a source.
The Navy had made out the case for the mid-life upgrade (MLU) in 2008; in 2012 the bids were opened.
It was for the first time that the naval helicopters of Russian origin were to be married with western sensors, making the Ka28s state-of-the-heart.
The Original Equipment Manufacturer (OEM) Rosoboronexport and Finmeccanica joined up, and the Navy's Ka28s were to be the first aircraft to get this with the total project costing over Rs 2,000 crore - thereby requiring a Cabinet Committee of Security (CCS) nod.
Having secured the approval, the MoD and the Navy painstakingly processed the case and even concluded Contract Negotiating Committee (CNC) with the parties involved.
However, following the VVIP helicopter scandal of last year which had Finmeccanica's AgustaWestland 101 helicopters at the heart of the matter and Finmeccanica's involvement in the Ka28 upgrade, the MoD sought a clearance from the CBI.
Subsequently, a team from the MoD had provided to the CBI all the details of the case and had even got a go-ahead.
However, for over a month now, the Navy is yet to hear from the Defence Minister's office. Only when the Defence Minister accepts the Navy's case can the file be sent to the CCS for vetting.
A request sent last week to the MoD's public relations wing for a response on this went unanswered.
However, sources pointed out that with the upcoming elections, "shutters are being downed and things are moving slower, if at all."
For a surface ship, the biggest threat comes from sub-surface ships or submarines. While every ship has a hull-mounted sonar for tracking sub-surface threats, experts believe that for neutralising enemy submarines, few can match the potency of an ASW helicopter.
(By: Daily Mail)