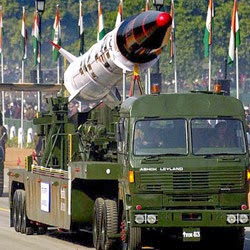 Given that India’s nuclear weapons programme was originally motivated more by the prestige factor than as a necessary means to meet real security threats, a gradual shift in India’s nuclear posture over the past few years has been viewed as worrisome by the community of strategic thinkers. The statements of Indian policymakers and military generals suggest a significant departure in its declaratory, if not its operational variation, from the official nuclear doctrine as revised in 2003. Influenced by a strong scientific community, India is moving away from its unequivocal policies of no first use (NFU) and ‘maintaining a credible minimum deterrent’. India’s development of its nuclear delivery capabilities can further play a destabilising role by triggering a nuclear arms race in the region. Because of its geopolitical weight, New Delhi’s choices will have significant implications both for deterrence stability in the region and the future of the evolving global nuclear order.
India’s 2003 nuclear doctrine pledged a strict adherence to a policy of NFU for its nuclear weapons. However, in 2010, Shiv Shankar Menon, India’s National Security Advisor, delivered a speech suggesting NFU policy be applicable only against non-nuclear weapons states. It implies that India no longer adheres to a similar pledge against Pakistan and China. Some experts believe India is also planning to build about 400 nuclear warheads, at least four times what Pakistan currently possesses. Emboldened by US support for its nuclear ambitions, India has embarked on a ‘ready nuclear arsenal policy’. This readiness to consider first use of nuclear weapons represents a doctrinal shift toward nuclear war fighting as opposed to a purely retaliatory posture.
The Indian nuclear establishment has also ditched its long-held claim of maintaining a ‘credible minimum deterrent’. Although much confusion surrounds what ‘minimum’ means in numbers, credible minimum deterrence is no longer the driving aim of India’s nuclear doctrine. Achieving a ‘credible minimum deterrent’ towards both of its primary strategic adversaries, China and Pakistan, means substantially different levels of capability. What is credible toward China will not be minimum toward Pakistan, and what is minimum toward Pakistan cannot be credible toward China. The probability of a major war with China is not very high so India’s nuclear posture should be framed keeping in view its primary deterrent adversary which is Pakistan and against whom they initially wanted to build a credible minimum deterrent. In addition, China is so advanced in nuclear capability that perhaps India will never be able to match China’s nuclear arsenal or delivery capability. But the prevailing attitudes toward nuclear weaponry among Indian nuclear security managers betray an over-obsession with China. Such attitudes will achieve nothing and start an unending nuclear arms race in South Asia. India’s conventional superiority could easily deter Pakistan from any attack against India, so India’s nuclear capability never had a ‘strategic’ justification but was a desire for ‘prestige’.
There is no gainsaying the fact that India’s nuclear establishment is going down this potentially dangerous path due to the overriding influence of nuclear scientists and technical bureaucracies. Like Pakistan, the civilian political leadership, due to complications of domestic politics, is not in a position to exercise authority over India’s vast nuclear establishment. The Defence Research and Development Organization (DRDO), the main organ responsible for determining India’s emerging nuclear posture, continues to waste money on the aforementioned immature and risky adventures, stupidly touting them as ‘world class capabilities’. DRDO officials publicly concede that most of these projects do not have clearance from the top political authorities in the country. For instance, the development of Agni VI, capable of carrying four to six warheads, in February 2013 had no sanction from the Union government of India. This policy of indulging in dangerous nuclear adventures may imperil global security in the long run. India’s highest civilian security leadership seriously needs to rein in the nuclear establishment and wrest control of India’s nuclear doctrine from parochial organisational interests.
The security of Pakistan’s nuclear programme has always received attention in the international media due to domestic political instability and growing internal militant threats. In contrast the security of Bhabha Atomic Research Centre (BARC) has been breached many times but there is little public discussion about threats to the security of India’s huge civilian and military nuclear infrastructure. Instead, an overriding assumption exists that relevant agencies in India provide enough security to nuclear infrastructure. The fact of the matter is that no nuclear state in the world is totally immune to security threats to its nuclear assets, or to the simple risk of safety-related accidents.
Given the rapid growth of India’s nuclear arsenal over the past few years, different homegrown insurgents and militants have the potential to compromise India’s nuclear security. But there is no public information available about practical measures taken by New Delhi to counter internal threats to its nuclear weapons.
The current changes in India’s strategic posture and deployment patterns, whether politically sanctioned or not, will surely force China and Pakistan to respond in ways that will likely prove detrimental to Indian and global security.
India has been modernising and expanding its forces both vertically and horizontally. Despite the world attention focused on Pakistan, developments regarding India’s nuclear doctrine may convert the country into a potential source of nuclear terrorism. The mad pursuit of research and development in Ballistic Missile Defence is totally inconsistent with a no-first-use posture and rather adds to unpredictability and uncertainty. Both India and Pakistan should halt expansion of their nuclear arsenals in order to enhance regional security.
(By: Daily Times)