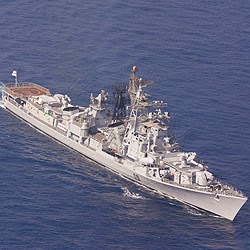 A frontline Indian Navy destroyer came very close to colliding with an American ship during a joint India-United States naval exercise. This has been disclosed by a US Navy officer on a public blog and in a follow-up AMA (Ask Me Anything) session between his readers and the author. The officer has also been severely critical of the professional standards of the Indian Navy. The blog was taken off after the Indian Navy took severe exception to the damning disclosure. The Sunday Guardian has a copy of the contents of the blog.
The revelation comes at a time when the Navy is in crisis following a string of accidents, which forced the resignation of Admiral D.K. Joshi.
The American officer, a lieutenant, serving on an Arleigh Burke destroyer of the US 7th Fleet, was an exchange officer for five days on the INS Delhi, the Indian flagship that participated in the India-US Malabar naval exercise in the Pacific.
"Their captain was driving the ship when it came within 50 feet of the stern of a USNS replenishment ship and at any given time there were multiple officers on the bridge screaming at each other. They were generally clueless and had almost zero seamanship skills," he claims.
A distance of just 50 feet between two large warships in choppy waters on the high seas qualifies as a near collision. The account suggests that the INS Delhi was approaching the US replenishment ship (a fuel tanker) to practice refuelling from an allied ship. The implications of a fully armed destroyer colliding with a floating oil tanker are very serious. An Indian Navy rear admiral was then on board the INS Delhi.
In a stunning indictment, the US Navy exchange officer observes that there was "no concept of safety of navigation... Absolutely did not adhere to rules of the road".
"Well, coming within 50 feet of another ship at sea is never a good sign. But, afterwards, the general consensus/excuse that they came up with during their mini-debrief was 'Oh well, rough seas, better luck next time' not 'holy ******* ****, we parted a tensioned wire cable made of braided steel under hundreds of thousands of pounds of tension'," he wrote.
The exchange officer — a surface warfare specialist — took a dim view both of the leadership style and also the fighting capability of the Indian Navy. "They could barely avoid hitting other ships in the middle of the Pacific, I doubt they'd be popping off any rounds (firing ammunition) with any amount of accuracy," he states.
Asked by a reader how he would rate the Indian Navy's chances in war, the officer responded, "I would be surprised if most of their gear worked. The stuff I saw (I got a pretty extensive tour) looked like it fell straight out of the 60s and 70s and I would be genuinely flabbergasted if they got any rounds off... Truthfully, after touring their ship extensively I would be very much surprised if the majority of their armament even successfully fired, let along hit anything."
When questioned, a senior Indian Navy officer dismissed the impression of the American officer. "Leading navies of the world have a healthy respect for the Indian Navy. Interaction and exchanges with the US Navy have only increased since this blog appeared. On the basis of its capability, the Indian Navy is among the world's most sought after navies for exercises and interaction," he claimed.
But observers are taking it more seriously because these are not just random observations but a detailed critique, even while accounting for some exaggerations and over-generalisation. "The engineering practices were abysmal....No electrical safety whatever. No operational risk management. No concept of safety of navigation," the US officer inferred.
In his view, the Indian sailors were casual about safety issues and were seen wearing sandals during important activities such as fuel replenishment and helicopter operations from the flight deck of the ship, and even in engineering spaces. "They legitimately didn't understand why I was wearing steel-toed flight deck boots. Things like these aren't cultural differences, they are golden exhibitions of their sheer lack of common sense and seamanship," he wrote.
Even more revealing are the American officer's observations on Indian leadership style, which is described as over-centralised, even feudal. "They don't entrust their people with any responsibility until they are very senior Lieutenants (O-3s) and junior Lieutenant Commanders (O-4s). At this point in the US Navy there are literally guys commanding ships, and these guys couldn't even be trusted to handle a radio circuit," the American observed.
He went on to describe the leadership style and the onboard culture as "extremely hierarchical and classist, even from a military standpoint", suggesting that all decisions are taken only by the captain, the executive officer (No. 2) and the navigation officer.
Clearly, rattled by what he describes as a near-collision between the INS Delhi and the US tanker, and the chaos on the bridge during that time, he scores the Indian Navy's sea skills at 3 out of 10, and blames it on faulty training. "They had some marginally competent folks, but for every one person who was half-competent, there were 4 other guys just standing around looking clueless. I would say that it's a fault in their training, because they have more than enough people running around not doing anything of particular use," he noted.
Repeated accidents in the Indian Navy may be giving more currency to the lieutenant's damning critique.
(By: The Sunday Guardian)