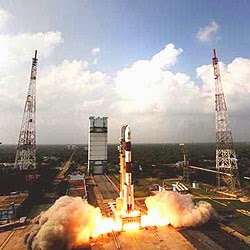 M.V.S. Prasad, Indian Space Research Organisation (ISRO) Scientist and Director, Satish Dhawan Space Centre (SDSC) at Sriharikota, on Monday said the ISRO is getting ready to launch the GSLV Mark III by the end of May next. Mr. Prasad, native of Mogaltur in West Godavari district, was honoured at Sri Y.N. College here on his receiving the Padmasri award for his contribution to the space science in the country. In this connection, he delivered a lecture on the Indian space programme with a special emphasis on SDSC SHAR.
A three-stage vehicle with 42.4m tall with a lift off weight of 630 tonnes, the GSLV Mark III is conceived and designed to help the ISRO put heavier satellites into the orbit, he said. The Stage-I comprising two identical S200 large solid boosters with 200 tonnes solid propellant, is already completed. L110 re-startable liquid stage under the stage-II is also over, he explained. The stage-III involving C25LOX/LH2 cryogenic stage is under progress, he added.
The SDSC is all poised to put a 4,000 kg. satellite into oribit with the help of a launch vehicle called the GSLV Mark III. The SDSC Director said 26 satellites worth Rs. 15,000 crore were put into orbit through a number of launch vehicles commissioned from the Sriharikota centre.
Saying that the erstwhile USSR was banned to use nuclear material for propulsion in rocket launching by the international community sometime back, it appeared that India too might be left with the no other alternative. Mr. Prasad described Tipu Sultan of Mysore as a pioneer in launching of the war rockets. An unfired rocket used against the British during the war for the first time in the world was used by scientists in the UK for research on developing war rockets, he said.
(By: The Hindu)