ISRO to launch Astrosat in 2015 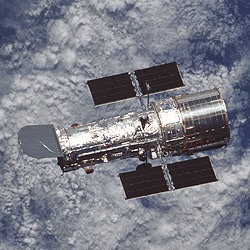 The Indian Space Research Organisation intends launching Astrosat, an astronomical satellite, in 2015, Chairman K. Radhakrishnan said here on Monday.
To be launched aboard a PSLV rocket, the satellite would have six pieces of equipment built by the Tata Institute of Fundamental Research and the Indian Institute of Astrophysics, he said addressing the 32nd convocation of Mangalore University on the Mangalagangotri campus.
Dr. Radhakrishnan said India had satellites to study weather, environment and water security and to help in communication. RISAT I, first indigenously built all-weather, radar-imaging satellite launched two years ago, opened up access to the microwave remote sensing system. It could see through cloud cover — for instance, in assessing flooding — and its radar worked in darkness. It was being used to monitor kharif crops such as paddy and jute.
“…We are moving towards enhanced launch capability through the GSLV Mk-III launch vehicle and even higher powered vehicles in the years to come. We have set ourselves uphill challenges that promise an active, fulfilling and technologically gratifying future for the Indian space programme ...”
Dr. Radhakrishnan later told press persons that ISRO’s entry into social media was to make the younger generation discuss science, especially space programmes. It would help draw young people, particularly those aged 18-34, to science.
(By: The Hindu)