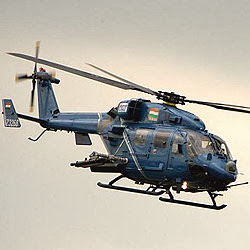 India will provide helicopters to war- torn Afghanistan "very soon" External Affairs Minister Salman Khurshid said today, months after President Hamid Karzai sought lethal weapons from the country.
"We are giving them helicopters and we will be supplying them very soon," Mr Khurshid told reporters who accompanied him on a day-long visit to Kandahar, where he inaugurated an agricultural university built with Indian aid.
"We have also been giving them some logistical support and we hopefully will be able to upgrade and refurbish their transport aircraft," he said.
Mr Khurshid did not specify the number or type of helicopters to be provided to Afghanistan.
Mr Karzai had sought military aid and equipment from India during a visit to New Delhi in December.
"Afghanistan is very special and uptil now wherever they felt they need (something), we have been giving them," Mr Khurshid said.
"I think it is consistent with our approach - building capacity,providing training. That seems to be going well. Ultimately it is what we mutually agree and is within our capacity to supply."
India is "not reluctant" about assisting Afghanistan as it has a very clear policy the world over to build capacity, Mr Khurshid said.
"We are not in the game of giving people large scale equipment which is lethal and so on," he said.
Earlier in Kandahar, Mr Karzai told journalists from India he was not dissatisfied with India's response to his request to supply military equipment to strengthen Afghan security forces.
"I am not disappointed. I am rather happy and grateful to India for its assistance," he said. "India's response has been good."
Mr Khurshid, speaking after he jointly inaugurated the Afghan National Agricultural Sciences and Technology University (ANASTU) in Kandahar with Karzai, said India will continue to assist the Afghan National Security Forces (ANSF).
The ANSF will play an important role in "this year of political and security transition" and the world community must fulfill its pledges to rebuild the Afghan National Army and Afghan National Police he said. Afghanistan is set to hold presidential polls on April 5 ahead of the US troop drawdown later this year.
(By: PTI)