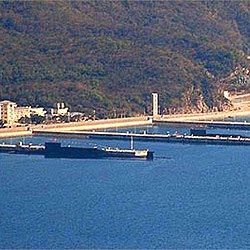 A photo revealed by a Chinese internet user shows that the People's Liberation Army Navy has deployed three Type 094 Jin-class ballistic missile submarines to its new naval facility in Yalong Bay on the southern island province of Hainan, which is likely to become China's new base to demonstrate its nuclear deterrence capability to the United States, reports the Communist Party-run English-language Global Times.
An earlier report by the Office of US Naval Intelligence said China was secretly constructing the world's largest nuclear submarine base in the world at Sanya in Hainan. Satellite photos on the website of the Chinese military taken during the recent Chinese New Year holidays showing three Type 094 Jin-class submarines appearing frequently in the waters around Yalong Bay also added to speculation.
Cao Weidong from the PLA Navy Military Academic Research Institute told state broadcaster China Central Television (CCTV) that China's nuclear submarine force should not be considered a homebody by its adversary. Cao said the Type 094 submarine has most likely already conducted patrol missions secretly in open waters. With an operational range of 14,000 kilometers, the US Navy believes that the JL-2 submarine-launched ballistic missile is capable of reaching the west coast of the continental United States.
From the perspective of many Western defense experts, the Type 094 Jin-class submarine and the JL-2 missile has given China its first credible sea-based nuclear deterrent, giving the PLA Navy second-strike capability. Since the base at Yalong Bay is constructed under the mountain, it will be very hard for the United States to detect the movement of Chinese submarines before it is too late.
(By: Global Times)