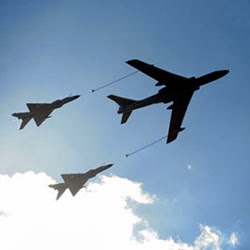 China's air force is fielding new precision-guided cruise missiles, long-range bombers and drones as its navy expands its long-range punch, according to US military intelligence officials.
"While we would not characterise the modernisation as accelerated, it's progressing at a steady pace and is significant, Mr Lee Fuell, a director at the Air Force's National Air and Space Intelligence Center, said in a presentation released last Thursday.
Mr Fuell's presentation and one prepared by the Office of Naval Intelligence (ONI) for a hearing of the US-China Economic and Security Review Commission in Washington are the most detailed new public assessments of the Chinese Air Force's and Navy's growing military capabilities.
Mr Fuell's remarks came after a warning last Tuesday by Mr Frank Kendall, the Pentagon's chief weapons buyer, who argued that China poses an increasing challenge to the US military's technological edge.
(By: Strait Times)