INS Vikrant to be auctioned 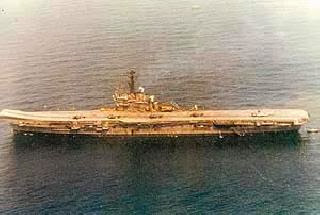 MUMBAI: Defence Ministry has initiated the process to auction the decommissioned aircraft carrier INS Vikrant after the Maharashtra government expressed inability to maintain the ship, Vice Admiral Shekhar Sinha, chief of Western Naval command, has said. "I am personally very sad as the ship will be scrapped" Sinha said on Tuesday, adding he was probably the last person who steered it.
"The Ministry of Defence has decided to auction INS Vikrant as the Maharashtra government has informed us they will not be able to maintain the ship," he said. Sinha said if anyone wanted to convert the ship into a museum, the Navy would extend help. He said the last date of receiving bids for auction is December 14.
"A few companies have already approached the Navy," the officer said. "There is an advisory board which will take decision and the highest bidder who will have to deposit some money," he said. The first aircraft carrier of the Indian Navy was commissioned in 1961 and after a distinguished service, she was decommissioned in January 1997. INS Vikrant had played a major role in the 1971 Bangladesh war.